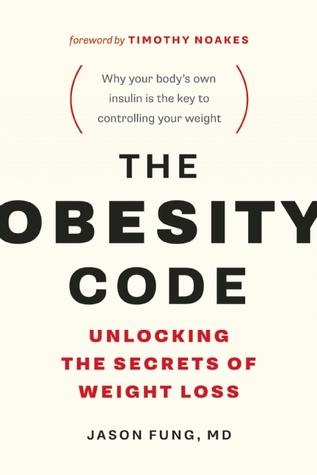 I am privileged to have finally gotten around to reading The Obesity Code – Unlocking The Secrets Of Weight Loss by Dr. Jason Fung. Reading this book has been on my to-do-list for some time. I will provide a brief review of the book below.

The premise of the book is that an individual’s own insulin is the key to controlling their weight. The book is divided into six main parts.

Part One – The Epidemic

The first part of the book describes how obesity has become an epidemic primarily through poor policy choices beginning in the 1960’s right through the McGovern Report issued in 1977. Which has been shown that this was not a scientific discovery but a government decree. The second chapter briefly discusses the nature versus nurture argument for obesity which sets the stage for discovery later in the book.

This section starts out with detailing some of the assumptions around calories such as “A calorie is a calorie”, which are then debunked. Next up is describing the exercise myth that believes that exercise is greatly or at least equally important as diet, which in stark reality is not true. Lastly, a brief discussion of Leptin is provided. Leptin is one of the primary hormones involved in weight regulation.

Part three begins explaining that obesity is due to hormonal imbalances and that increasing insulin or cortisol (the stress hormone) will lead to weight gain. Other conditions beyond obesity, such as Cushing’s syndrome and Sleep deprivation are treated with these hormones, therefore trying to solve one problem can lead to another. Also discussed are the imbalances in the hormones leptin and ghrelin, which control fat storage and appetite. This can also lead to weight gain and can be influenced by the amount of sleep one gets. Next an explanation of the beginning of the low carb era (Atkins Diet) is described before moving on to the key topic of insulin resistance. One becomes insulin resistant by spending the majority of the day with elevated insulin levels. So how does this happen? Primarily with frequent eating and snacking over years and years. When a person has three square meals a day and three snacks in between, their insulin levels stay elevated throughout the day without ever getting a chance to level off.

Section four begins by discussing Big Food and More Food, meaning food companies cannot make increasing profits if people eat less food. So with the help of regulations, people were encouraged to “Eat six small meals a day”, “Eat more snacks”, “Eat low fat”, “Eat more whole grains” etc., and how this led to increased obesity and diabetes. The next topic discussed is socio-economic status and obesity. The less well-off a region or population base is, the higher the rates of obesity. This is due to highly processed carbohydrates being cheaper than alternatives because the production of these are subsidized by the government. The final discussion of part four is centered on the growth of childhood obesity over the last 40 years and essentially the notion that the same factors that are making adults obese is also making our kids obese.

Part five of the book begins with the argument that sugar is fattening and that fructose is the most dangerous sugar. A sound scientific case is made and then nicely transitions into the negative effects of artificial sweeteners. Those in “Diet” sodas and fancy coffee concoctions such as aspartame, acesulfame potassium or sucralose are some examples. The following two chapters discuss the myths of carbohydrates and getting enough fiber and ill-fated notion of increasing protein if reducing carbohydrates (ie. Atkins 2.0- as described by Dr. Fung). Finally, the last chapter describes Dr. Ancel Keys published advice in 1959 that created the “Fat Phobia” that exists to this day and how this advice that the nutritional guidelines have been based on has been proven false. Eating fat in itself will not make you fat!

The actionable items of the book are here in the last part. A very thoughtful approach to What to Eat and When to Eat. What to eat boils down to these five simple steps:

5. Increase consumption of fiber and vinegar

Then the book goes on to explain when to eat is all about fasting. How the hormones discussed earlier adapt to fasting, myths about fasting and how a person can start with fasting.

I felt this was an easy to understand book with the right balance of scientific discussion and easy to understand concepts for the everyday reader. If you or someone you know is struggling with their weight this is an eye opener to why and what you can do about it. This book in part was an inspiration for me to experiment with fasting. That will be a blog post in the future. I enjoyed this book and look forward to reading Dr. Fung’s next book The Diabetes Code.